Be Very Careful, The Water Gets Deep Quickly, and You May Be In Over Your Head Before You Know It.

You want to make an app? Well there’s more than one option and depending on your budget, your free time and risk aversion, one of these options should do the trick.

It’s tough to believe just how high some of these guys price their work, But, in fairness, here’s a good slice of the market.
So, how much does it cost to develop an app?

Let’s look at the different options you have at your disposal:

1. Pay a software company or mobile app development agency to build your app.
(Most expensive)

2. Pay a freelancer to create your app for you.

3. Buy an app template or starter kit and hire a freelancer to customize it.

4. Buy an app template or starter kit and learn enough coding to customize it yourself.

5. Use an online app maker or app maker software.

6. Learn mobile app development and make your own app.

7. Partner with a developer to create your app and split the profit or equity in the company.
(Least expensive)

Or, you could let Appture build an app for you.

1. Pay a software company or mobile app development agency to build your app

Most expensive but surest option

I worked at a few mobile app development companies where we built apps for our clients and if you can believe it, charged anywhere from $150-$200/hour. It’s safe to say that for an individual with an app idea, this option is difficult to pursue unless you have really deep pockets!

High quality apps built by a team of professionals

The really polished and robust apps that frequent the top charts of the App Store are usually built by one of these mobile app agencies. There are exceptions to the rule of course, and there are a ton of indie developers who have built popular apps but if money wasn’t a concern and I wanted the highest chance of making a great mobile app, I’d hire a team of developers and designers from one of these mobile app companies.

this is how’d I go about it

If that sounds like you and you want to pursue this path, then this is how’d I go about it:
– Find apps that I really admire and are successful
– Find out which company built them
– Contact them and inquire about rates

Don’t have a ton of cash to create your app with? Read on!

2. Pay a freelancer to create your app for you.

Potentially great quality at a fraction of the cost

Guess what? Going with this route, you can still achieve the same level of quality for your app compared to the app agency option above! The reason is because the software consulting companies charge clients an hourly rate that is marked up from what they’re actually paying their employees. That’s how they make money!

You can find some really decent developers and designers for ~$50/hour.

So what are the risks?

– You have a team of strangers working together. In most cases, your freelance designer and your freelance programmer have never worked together before so there’s a risk of miscommunication and things falling through the cracks.

– The app may not turn out how you imagined. With freelance programmers, you’re going to have to have a really clear idea of how the app is going to look and work because s/he’ll will simply build whatever you tell them to build.

On the other hand, when you engage a software development agency to build your app, they usually work with you to tease out your idea into a concrete idea. You’ll have people gathering requirements from you and forcing you to think through every little scenario. With freelancers, you’ll have to do this on your own and then communicate those requirements to them.

– You might have a terrible experience. There are tons of stories out there about missed deadlines, shoddy work, unforeseen costs and generally freelancers being unreliable. The risk is that you might accidentally hire someone like this!

On the brighter side, freelance sites have a lots of ways to gauge the performance of a freelancer these days. From ratings and reviews to past projects that the freelancer has done for other clients, make sure that you take someone on who has a good track record.

3. Buy an app template or starter kit and hire a freelancer to customize it.

Mainstream app ideas can be made cheaply

If your app idea is very similar to another app that is popular in the App Store, then this might be the option for you. As with anything that gets really popular, a ton of clones always follows. Chances are that someone has created a clone of your popular app idea and is selling that source code for $50-$150 per license. That means that you can publish it to the app store once. Multi-license will probably be just a little bit more than that range.

You still need to customize the app template

At the very least, you’ll need new graphic assets to replace the ones in the source code that you bought. If you have some artistic ability, you can create them yourself or you may need to hire a freelance designer to create them for you.

Furthermore, if you want some extra functionality or you want to change how something works in the app source code that you bought, you’ll have to also hire a freelance programmer to change it for you!

Because you’re leveraging pre-existing code, this option will still be cheaper than hiring a software company or freelancers to built your entire app.

What are the risks?

– The app template may not be exactly what you’re looking for. The more you need to change, the more it’ll cost you.

– The app template may be buggy. If there are bugs in the source code, it’ll take your freelance developer more time (which means more money) to figure out where the bug is and how to fix it because s/he will have to first understand and sort out all of this code which s/he didn’t write. They have to orient themselves and get familiar with the code base and that takes time. This may come as a surprise and it’ll really add to the cost of building an app

4. Buy an app template or starter kit and learn enough coding to customize it yourself.

I’ll be honest: Learning to code yourself isn’t always easy. You definitely need to set aside time to learn and to practice before you can get the hang of it.

If you’re on a budget and your changes aren’t complex (such as just make a few tweaks to existing functionality), then this could be a viable option for you.

I have to plug my own site here ???? The investment in buying a course for $99 will save you money compared to hiring a freelance developer to make changes at $40/hour. However, you will need to dedicate the time and commitment to learning a new skill.

5. Use an online app maker or app maker software.

What is an app maker?

To be honest, I wasn’t even aware that this was a term! But an app maker, app creator or app builder is a piece of software or an online service that lets the user customize and build their app inside of an editor often without needing any knowledge of coding. Sounds awesome right?

May be rigid but also may be exactly what you need

Because there’s so much variety and so many options when it comes to building an app, some app creators may limit you to a certain type of app or a certain type of navigation. Then you customize or tweak the app within those constraints.

Other app builders may offer a dizzying array of options and ways to configure it. The best way to find out if this is for you is to try it out.

The prices for these services and software vary but can range from $10 a month to a one time cost of $5000. It’s difficult to nail down where on the scale this option fits because of these big price ranges. There are even free app makers out there but as you can expect, they’re not very full featured.

6. Learn mobile app development and make your own app.

This is the most affordable option if you’re on a budget to have your app created. All of the information to learn is freely available on the internet and Apple provides documentation for learning to code. However, if you want to save a bit of time and to learn efficiently, you can invest $99 to purchasing a coding course and dedicate the time to learn a new skill.

Once you learn to code, you’ll be able to build any app you want and if there’s something you don’t know how to do, Google is there to help. These days, tutorials and articles are abundant on the net and you can usually find a tutorial on the functionality you want to implement. However, you need to learn how to read and understand code and app development before you can understand these tutorials.

Once you past the hump, you can build anything you want

The “hump” is that spot where I see everyone giving up. It’s the part about a week in, when some students start to falter and their dedication starts to be tested. For those students who persevere and get past that point, the sky’s the limit because now they start to understand how an app is built and how to read code.

At this point, it’s like you’ve learned how to read some ancient language and now suddenly all of this knowledge is open to you and ripe for your picking!

7. Partner with a developer to create your app and split the profit or equity in the company.

Most developers won’t be open to this idea unless you know them personally because there’s just too much risk in working with a stranger and the chances of success are so slim.

The only way I see this working is if you already know someone who is a programmer or designer and you can convince them of your idea and you also bring something to the table. 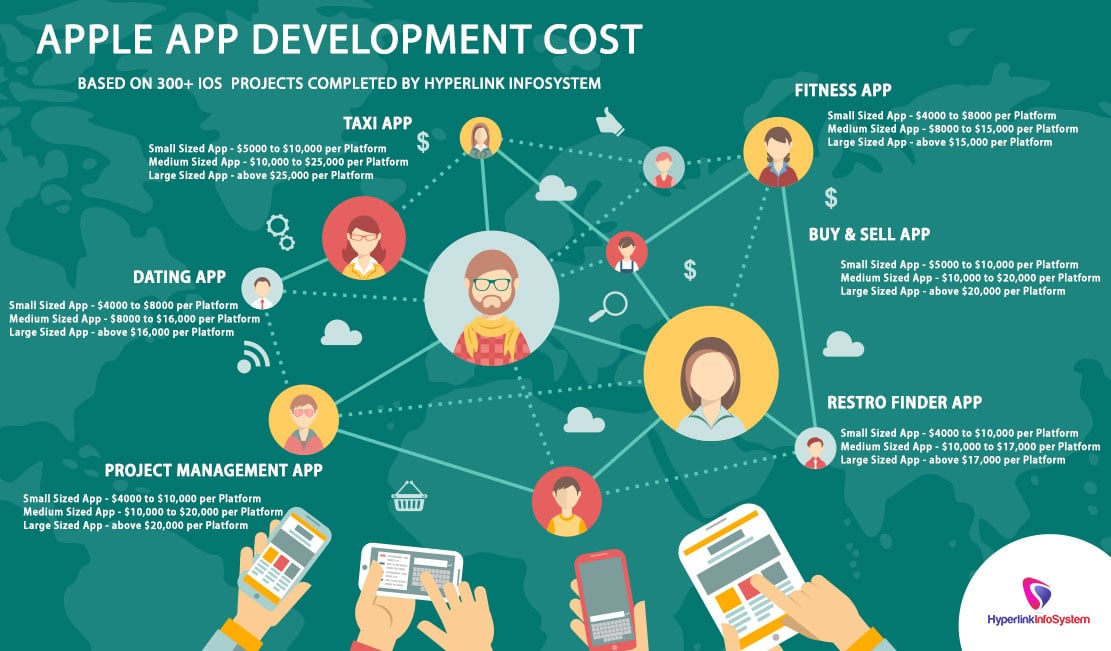 In conclusion, it’s not so easy to answer the question of how much it costs to make an app because there’s a big range depending on your unique situation. There are a handful of options that depend on how much money and time you have.

Finally, let’s put some concrete numbers on these two options so you can really get an idea of how much an app costs. Getting an app development company to build your app can cost from $10,000 to $60,000 for a small to medium sized app. The range is so big because it will really depend on the complexity of the app and number of screens. Learning to code yourself will obviously just be the price of your learning material, whether that’s a $99 course or a $3000 bootcamp.

I hope this article helps! Feel free to reach out to me if you have any questions!

Want more leads from mobile?
Want To Be Mobile Savvy?
Is Voice Search the Next Big Thing?
Wait No More, 2016 Is the Year Small Businesses Must Develop Mobile Apps